Beyond all the concrete, where hills start to take over from the plains and give way to orange groves and ancient olive trees, rises Bernia, a mountain framed by the azure blue of both the sea and the sky, and which has been the sub-ject of /egends for thousands of years. Old pathways, followed in other more distant times by masked bandits and Roya/ist soldiers, rise to the summit of this mountain which divides the two Marinas. The secret is that Bernia is a mountain that knows no compromise as it takes on its distinctive multi-coloured hues, the envy of any expressionist painter, capable of baring the soul of a landscape that takes hold of the emotions as soon as it comes into view. 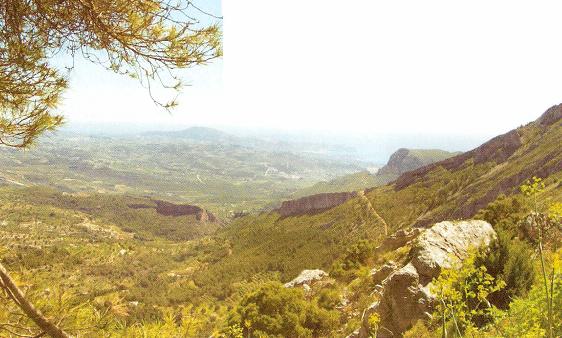 Various pathways traverse and intersect Bernia 's horizons, and the beauty of the landscape be/ies the difficulty of the terrain. Bernia, whose orientation is NW-SE, is a mountain which encroaches on the municipa/ities of Altea, Callosa d'En Sarriá , Calpe, Benissa and Xalo, and like the backbone of a giant monster, divides the Marina Alta from the Marina Baja (the lower and upper Marinas).

The mountain descends smoothly from Callosa d'En Sarriá until it reaches the sea, where the towns of Altea and Calpe merge. The sharp crest maintains a constant orientation and the simplicity of its form disguises its complicated geology

Nine kilometres in length, it /ies perpendicular to the coast where it sud-denly descends rapidly at the rugged Morro de Toix and forms part of the Pre-Betic southern section of the Betic range. Its amazing cliffs and narrow passes, like that of Mascarat for example, as well as the scarp edges and aggressive peaks reveal the youth of the mountain and make it seem much higher than it actually is. Another outstanding feature is that of the narrow transversal pass of Mascarat, which represents a veritable fissure of more than 300 metres in depth.

A combination of biological and physical factors has made the morphology of Bernia what it 15 today, including climate, temperature, vegetation and the effects of grazing animals. However, it is man that has left the most obvious mark.

The most aggressive slope in Bernia is to be found at its southern edge where it falls away steeply to the sea and is criss-crossed with footpaths and animal tracks. Although rainfall is scarce, it does have its effect on the landscape where it col-lects in the folds of the rock and the slopes of Mascarat, maintaining enough humid-ity to support swathes of la vender and rosemary as well as carrasco pine. In fact, Bernia supports a vegetation cover which is surprising in its diversity, densityand range of colour.

Along the crest of the mountain and in other areas the palm Chamareops humilis (also known locally as margalló) flourishes. It is the only palm native to Europe. Whilst these palms are much more commonly found on the south facing slopes; on northerly facing slopes they are relatively scarce. 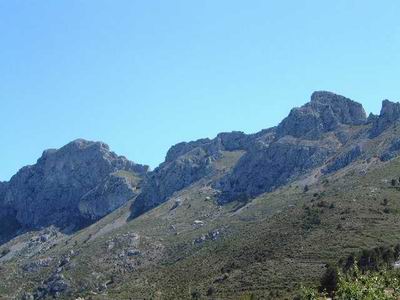 Since time immemorial Bernia has been subjected to intense human activity which has left its mark throughout the massif which, as well as serving as a front between warring factions, is also the stuff of legends dating back to the times when the Moors and Christians struggled for control of the territory. The Fort de Bernia is just one of these footprints left by mano The fortress was constructed in 1562, by the Ita/ian engineer, Giovanni Battista Antonel/i, under the orders of Phillip 11, to keep watch over the coast and avoid attacks by Barbary Pirates. The fort never really lived up to its expectations and remained operative for a mere 50 years. In 1612, it was pulled down by royal decree to avoid it being used as a stronghold by the very pirates and vil-lains it was intended to protect against, since the protection offered by Bernia often served as an operational base for all kinds of invading factions in the Marina in those days.

In the 18th and 19" centuries, and even up until the beginnings of the 2()' century, Bernia was home to legendary bandits who robbed the rich to give to the poor. In fact, one of the largest passes in the mountain was named after one of the most famous of these ban-dits: Mascarat.

Legend has it that a masked bandit would continually hold up wealthy trav-ellers through the area for the benefit of those less well off. Nobody could ever say for sure who the man behind the mas k was, but there were those who dared to suggest that it might have been a young man from la Vall de Laguar, who had reportedly disappeared without trace from his village and whose /ifeless body, dressed in black and hooded, was left in the doorway of the house where he had been born. When the neigh-bours removed the mask they were hor-rified to see his once handsome face disfigured by leprosy 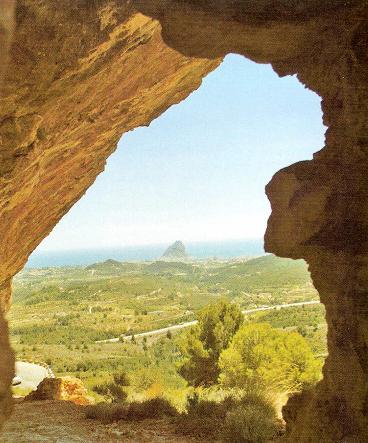 This article propases two short routes (PR-V) taken from the guide: Guía Senda Verde, senderos de la provincia de Alicante (Green route guide:
Hiking trails around Alicante Province) published by the Valencian Regional Department for the En vironment. This type of route is marked with typical yellow and white signposts. The first ofthe proposed routes begins in Altea la Vella, and the second in Callosa d'En Sarriá . However, in Bernia there are several more routes to choose from since the whole massif is crisscrossed by paths which begin in the rougher terrain of the interior and end where the waves wash up against the rocks of Morro de Toix. AII that remains is to choose your route and set off to enjoy thls wonderful stretch of countryside with spectacular views at every turno.

The PRV-48 begins at Les Fonts del Algar, a spot where the slopes of Bernia and Ferrer meet and where crystalline waters pass through a narrow gorge. The route climbs up to the Cava del Bardalet and from there on to Corral del Bancal Roig, an ancient resting place for cat-tle. Following a dirt track which runs between ancient banks, you come to Fort de Bernia, where the route joins with the PRV-7 which then climbs to the summit following a well-marked path.
Length of trip: 5.5 kilometres Estimated time: 2 hours 30 minutes Difficulty: Medium
Itinerary: Fonts de I 'Algar - Cueva del Bardalet - Bancal Roix - Fuente and Fuerte de Bernia, link with PRV-7.
Camping: Fonts de l'Algar in Callosa dEn Sarriá.
Recreation areas: El Runar in Altea and El Bancal L1arg in Xaló.
Places of interest: The summit of Bernia at an altitude of 1,126 metres, Fort de Bernia, Fonts de l'Algar, Xaló pass, Pas deis Bandolers and the tunnel under the summit called el Forat and the cave at Bardalet.

Morning breaks in Sierra Bernia with the squawking of seagulls. The black-headed gull, together with other seabirds, like storm petrels, shags , Cory's shearwaters, Balearic shearwaters and gannets and some species of birds of prey like peregrine falcons and Bonelli's eagles are the most conspicuous bird l/fe dur-ing the day. In the heat of the sun, the sound of cicadas mingles with the f1utter of butterflies playing among the f1owers. At night, nocturnal predators like tawny owls, longeared owls and eagle owls show up to share the terrain with foxes, martens, badgers and bats that enjoy the pitch black of the night at their leisure. This is the life in Bernia.